I’ve been in the market to get a smile makeover. I understand that porcelain veneers are more preferred than Lumineers. What I am trying to figure out is which dentist to do it. I’ve narrowed it down to three different dentists that have the highest ratings on Yelp! for cosmetic dentistry. Are there any tips for picking between the three of them? 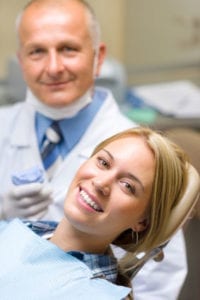 We’ll get to choosing your cosmetic dentist in just a moment. There was something else you mentioned that I want to clear up a bit because it is a common confusion. Lumineers aren’t a different procedure than porcelain veneers. They are simply a brand of porcelain veneers. One that is highly marketed.

You were probably under the impression they were different because most highly skilled cosmetic dentists aren’t crazy about the Lumineers brand. They prefer other brands. This has more to do with their lab than anything else. Most cosmetic dentists prefer to choose their own lab and ceramists. The DenMat company, which owns the Lumineers brand insists dentists use their labs. This particular lab is not known for its artistic results.

When it comes to choosing the best cosmetic dentist, Yelp! isn’t your best option. It is a great service for many things, but this isn’t one of them. That has to do with their algorithm. They factor in patient’s reviews, but don’t seem to distinguish between what type of procedures are done with those reviews.

As an example, I did an experiment. I searched for a cosmetic dentist in a large city. Of the top five they listed, only one has the qualifications to do skilled cosmetic work. Three of them don’t even do cosmetic work. The final dentist does some, but the before and after photos he shows in his smile gallery are strictly stock photos. This tells me he doesn’t have any quality work of his own to show.

If you truly want a proven artistic cosmetic dentist, the easiest way to get that is to go to the website for the American Academy of Cosmetic Dentistry (aacd.com). They have an accreditation program which is designed to help patients in this very situation. In order to reach accreditation, dentists have to pass stringent exams as well as provide visual evidence of their artistry. These dentists are the best cosmetic dentists in the country.

This blog is brought to you by Grosse Pointe Woods Cosmetic Dentist Dr. Theodore Hadgis.