I’ve recently read some reviews of the Tanda Pearl Ionic whitening system. This allows you to whiten your teeth in just 5 minutes a day. People are saying it’s working. I’ve been using the tray my dentist provided for me, but I’ve noticed when I use it, it aggravates my TMJ. I wondered if the Tanda system is a better option for me because it works so much more quickly. Do you know if this option is safe? 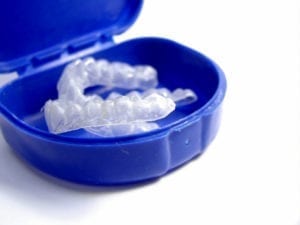 The type of whitening that Tanda Pearl uses is similar to how most teeth whitening works. It uses a peroxide gel. The light they use isn’t special, but my guess is that it is just there for psychological reasons. If they had a light that made whitening work that quickly in reality, they’d make a total fortune selling that to dental offices. The fact that they’re not even trying tells me they know it doesn’t really do much.

However, there is a MAJOR difference between the trays your dentist likely provided you and the whitening tray available through Tanda Pearl. Your dentist should have made a custom-fit tray for each arch of your teeth. The Tanda Pearl system has one tray that you have to bite down on in order to keep it in your mouth. Even for just five minutes, that will cause your TMJ pain to be significantly worse. You don’t want to have to clench your jaw for any period of time.

In your place, I would do two things. First, tell your dentist that the trays are aggravating your TMJ Disorder. Maybe there is something off about their fit. If he doesn’t have significant TMJ training, you may want to see a dentist who does. It’s not something that is taught in dental school. A dentist has to invest in post-doctoral training in order to properly treat TMJ Disorder.

If the trays are fine, then just cut back on the amount of time you’re wearing them. If the idea of five minutes appealed to you, wear them for five minutes. The amount of time the gel is worn only affects how quickly the teeth whiten. They’ll still whiten. As you’ve already paid for the trays, I wouldn’t bother wasting money on something else.

This blog is brought to you by Grosse Pointe Woods Dentist Dr. Theodore Hadgis.